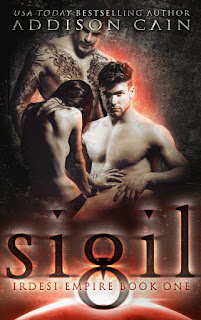 I received an ARC of the extended version from the author in exchange for an honest review.
I read Sigil for the first time a year ago (it was a 3 stars review), found I liked this version better.
It's very dark, as all Addison's books are. There's rape and dubious consent. I felt for Quinn, I was heartbroken. She thinks of herself as a monster, but she's only a traumatized child growing up as a very unique, really broken woman constantly on the run.
I still don't know how to accept her obvious relationship/relationships in the future. She hates everyone, an me with her. The emperor and his brothers have a lot of groveling to do.
It's really well written, but I still prefer her Alpha series.
3.5/4 stars 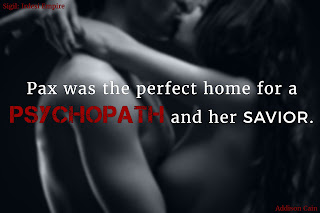 Blurb:
Quinn cannot escape Pax.
After a century spent in hiding, the Irdesi Emperor has finally cornered her—and as their species’ only female, Sovereign and his brothers are ravenous to claim her as their bride. They wish to take, to please... but above all, they wish to control.
They outnumber her, they are stronger, and they are relentless.
But the males don’t know Pax Station like she does. They don't know how far Quinn will go in her war against the unwanted attentions of old enemies. Enemies who claim to love her. Enemies who take without asking.
Enemies who terrify and confuse, threaten and adore.
And she has no way out.
Sentenza emessa da Gonza a 9:23 AM